With my new mantra (“Don’t tank!”) firmly in mind, I headed into my next two final exams: Advanced Pastry, and Chocolates and Showpieces. The projects for both classes had been in design for several weeks, but the run-throughs I’d done at home weren’t going smoothly.

The Advanced Pastry practical had been particularly rocky. I knew the flavor scheme I’d put together was solid, but I had tinkered with my main recipe (of course!) to the point where I wasn’t sure it would still hold together and it continued to have some kinks that needed to be worked out. I also changed all the surrounding elements numerous times, which is crazy-making. The pineapple garnish alone I tried five different ways before settling on roasting it. Five different ways. For a tiny garnish. Painstaking. 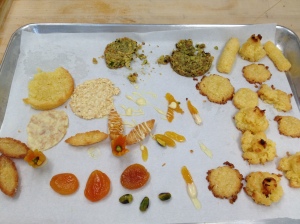 Trying different bases and other combinations

For Chocolates, I was doing a sugar showpiece to present molded chocolates filled with spiced rum buttercream. Casting sugar is super cool (see “Rolling the Dice With Sugar”) but it is rather unpredictable — and isn’t lack of predictability always a blast in a final exam? (Rhetorical.)

We had only spent a class or two on molded chocolates at the beginning of the semester so my actual hands-on time was limited to one try — and chocolate can be a harsh mistress. To that effect, the trial run crashed and burned, which is always a bit unnerving. Hmpf. It seems none of my lists and copious amounts of notes helped me out when the chocolate chips were down.

I re-did my game plan for the final since I was determined to turn out twelve perfectly formed, glossy, gorgeous molded chocolates come hell or high water.  And it worked. The chocolates turned out beautifully.

And, the sugar showpiece wasn’t bad, considering. The core pieces, by necessity, were made in Week 1, so they had lost a lot of their luster from sitting and had developed a kind of dull bloom. You can try to shine these up with careful application of a torch, but this is risky since it basically heats the sugar to melting again to get it to re-set with shine. The risk is that warming the piece up in this way will deform it. Which it did, when I tried it. Because you know I tried it. Even after the buttercream life lesson in my last post I still couldn’t keep from messing with the pieces to try to “fix them” (make them a little shinier).

Recasting the double-cast base since the first one cracked (cast on oiled tin foil for texture).

A variety of cast elements for the serving trays

There were various other bumps in the sugar showpiece road — particularly the pulled sugar elements, for which my design was far too ambitious. I guess I thought I could pull off lovely, delicate, multi-colored flowers with nothing between my tender hands and that beyond-boiling sugar but a pair of disposable latex gloves — after having tried pulling sugar just two or three times prior.  That was deluded of me. I can barely fold a piece of paper into an envelope without practice let alone construct tropical flower petals from hot sugar. I pulled a vaguely tropical looking water flower and watched all but a few of the petals shatter on assembly.  C’est la vie. 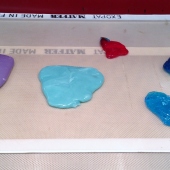 But, all is well that ends well. The Coconut Rum Mousse with Apricot Sauce, Roasted Pineapple, and Coconut Macaroon Barquettes came in on time, the mousse didn’t collapse on its way to presentation, and it all went over well with my chef (at last! Various other incarnations of this dessert got panned repeatedly by various chefs along the way — all of which kept me working away at a combination that would hit all the right technical notes while still satisfying my vision of a fresh, light, fruit-centric summertime plated dessert).

It was an extremely gratifying moment for me when Chef told me he didn’t have a single piece of critical feedback for me. I consider that a parting gift from him since I am sure the dessert wasn’t perfect. In any case, staying on top in that class had been my biggest challenge of the semester and that score is definitely how I wanted to ride out into the Advanced Pastry sunset.

And the sugar showpiece? It also pulled out a score I was happy with. I took one last look at it, wistfully, as I slid it into the garbage can on my way out of the door. I wasn’t even going to try loading it into my car. There is no way it would have made it home without shattering, and shattered sugar shards in my trunk is the last thing I wanted to deal with. But the chocolates? They came home with me.

Some of the other student sugar showpieces — this one is amazing — look at the caterpillar, the flowers, and the hookah!

Some of the other student sugar showpieces

Another student pretends to be winning an award for his sugar showpiece..