I was joking around about local hot dog spots (see “What’s So Great About Ben’s Chili Bowl?“) and mentioned I might check out Ann’s Dari-Creme in Glen Burnie, MD — a tiny little place which looks even tinier since a shopping mall sprang up behind it. I had heard about it years ago when I first moved to the Annapolis, MD area from a friend who had grown up in that area, but I never bothered to check it out. I wasn’t inclined to go out of my way for a hot dog.  But, after I mentioned it in my other post I had to look it up to create the website link (they don’t have their own website, but I linked to the yelp.com section about them) and I discovered that it’s considered quite the little local gem. There’s an article in the Washington Post that I never could get to load, and allegedly an article in the Washingtonian that I couldn’t actually read because I refused to sign up and make an account just to read about hot dogs. (Clearly my research strategies are rather lazy on this topic). I can provide, however, the link to the tripadvisor.com reviews, the format of which I used to be very fond of back before I consigned myself to the endless grind of student-dom and signed away any possibility of having the time or money to do anything fun or actually travel somewhere more than 25 miles away.

I heard it can get nutso in there so I went to check them out on a quiet Wednesday night. The sign outside declares they’ve been there for over 62 years. It’s a small place, very intimate, and I had to step right up to the counter without preamble. There were people waiting for their food all quiet as could be. I was not prepared. I got flustered.

This is how confident Ann’s Dari-Creme is: there are only three mains on the menu – six, if you count ordering something with or without cheese as a separate choice – no descriptions, no elaborations. I ordered the Famous Foot-Long and when she asked me what I wanted on it, I blanked.

Ummmm. I looked at the sign. No clues. Onions? Relish? Ketchup? What’s “Everything”?

Seconds ticked by as I imagined how you could put ketchup on a dog and then fry it. I pictured them dressing the dog and then putting the whole thing in the fryer, like a deep fried Twinkie. Impossible. I couldn’t make it add up, and she was waiting. I blurted out “relish and mustard” which is weird since I don’t think I’ve ever eaten a hot dog without ketchup before, and then I wondered if I was sweating. And why was it so infernally quiet in there? I also ordered, for market research purposes, a half a cheesesteak — another oddity since I can count on one hand the number of times I’ve deigned to order a cheesesteak outside of the Philadelphia area. There must’ve been a funny moon out that night.

I sat at the counter waiting for my order and listened to everyone else who came in. They all knew what was up. They sounded like they had been ordering the same thing for 30 years. I quickly realized I had made a mistake — I should’ve gotten “Everything” since “Everything” meant chili. Rats! Now I was just getting a stupid old dog. Without ketchup, no less. Lame.

My dog came and it looked mighty lonely wrapped up in that big bun without any chili on it. A foot-long sounds big, right? They’re actually not very big. They are about the diameter of my index finger, max, not like the hot dogs you get at a ballgame or picnic. And I have a thing about excess bun on things, so I cropped all the excess bun off my dog and thought about how to get my order right next time. My new plan: The Double Dog, Half Order. Yes. Think about that for a second. But, a half a double dog is like just getting a single dog, right? Right. Same amount of dog, half the bun. It’s genius! Now, on to the cheesesteak.

I can be real snotty about my cheesesteaks, but I have to tell you something about this one hit me the right way. The bread wasn’t Amoroso’s, of course, but they used thin minute steaks, so that worked for me. You know how some places try to jazz it up by using thinly sliced ribeye or some such nonsense? Nope, give me that shaved beef, preferably pressed into an unnatural sheet of meat so that when you throw it on the flattop you have to chop it up again with your grill spatula. Then give me those fried onions that still have some bite to them and shove it in a soft hoagie roll…That’s the business. It was tasty.

After I got home I revisited the reviews on TripAdvisor and realized everything I had needed to know had been there all along: order an “Everything” or an “Everything, no onions” or everyone will know you are a loser. Sigh. Next time.

Fast forward to: Next Time

This time I’m sure I’ll get it right. It’s daytime, so I can see they have a sign outside — a newbie cheatsheet- that breaks it down for you about how to order (so that’s how those TripAdvisor reviewers had it together so fast!). I discover you can request your hot dog onions grilled, so I do this, but it appears I used too many words for that request because the counter gal looked at me very tiredly and shorthanded it back to me. I was so consumed with getting the fried onion lingo down that I forgot my clever trick of ordering the Half Double. Sigh. Oh well. Next time. Practice makes perfect.

Ann’s was crowded this time and I sat at the counter waiting for my dog watching the ladies sling hot dogs. These gals are serious. Nobody writes anything down. The one taking the orders, Lady A, tells the one working the grill, Lady B, as she puts out the right numbers of rolls for her. Everything (that I saw ordered each time I was there, anyway) goes on the same roll, a sub roll, so that certainly doesn’t help them keep it straight. At one point the lady at the grill, Lady B, had fifteen — yes, I counted them — identical rolls laid out in front of her and she just kept on keeping on. Over the next five minutes she filled every one of those rolls without saying a word. Then Lady A takes them back, bags them up — I have no idea how she knows which thing goes with which order since they are all wrapped in the same white paper — calls them out, the people pay and everyone is happy. It was fascinating to watch.

I learned a lot sitting there. For instance, I learned that you can get a gigantic soft serve cone with rainbow sprinkles (“jimmies”) for $2.45. I learned that people in Glen Burnie love their Double Dogs with Everything. And I learned I would never be able to work there since I can’t remember any order for more than 5 seconds. Those ladies must have photographic memories. Like I said, practice makes perfect.

Just so you know, Ann’s also serves french fries in a cup (“boardwalk”-style), shakes and those soft-serve cones I mentioned. They also have soft-serve sundaes and one of the toppings is wet walnut, which you don’t see much these days. That might be a trip all its own.

Would I trek to Ann’s from afar? No. Would I go back if I was cruising by and got a bee in my bonnet for a hot dog or (kinda) cheesesteak? Totally. And next time I’ll slide in and out like a Dari Creme pro. 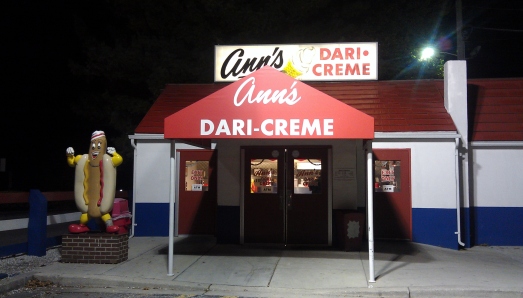 Cash only. Or, you can use the ATM inside.

What a happy dog!